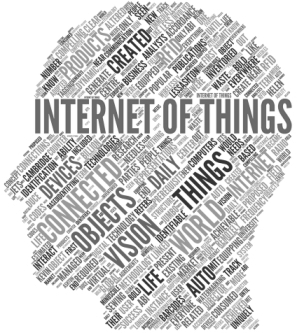 The Internet of Things or IoT is a concept describing humans, animals and ordinary physical objects surrounding us in day to day life, as being connected to the Internet with unique identifiers. In this vision, all objects can communicate with each other and/or with central hubs (controllers) in order to report events or measurements (sensors), to perform certain tasks such as opening a door or turning on a heating system (actuators or actors) and to observe/monitor certain events (humans).

The IoT concept defines objects with digital presence as more important and “smarter than themselves” thanks to that “distributed knowledge” also known as “ambient intelligence”.

Initial use of “Internet of Things” (IoT) term has been attributed to Kevin Ashton for his presentation made at Procter & Gamble (P&G) in 1999.

“If we had computers that knew everything there was to know about things – using data they gathered without any help from us – we would be able to track and count everything, and greatly reduce waste, loss and cost. We would know when things needed replacing, repairing or recalling, and whether they were fresh or past their best”.